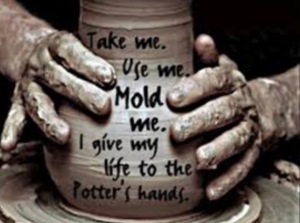 “To illustrate all this: suppose I were to be describing to a person, who was entirely ignorant of the subject, the way in which a lump of clay is made into a beautiful vessel. I tell him first the part of the clay in the matter, and all I can say about this is, that the clay is put into the potter’s hands, and then lies passive there, submitting itself to all the turnings and overturnings of the potter’s hands upon it. There is really nothing else to be said about the clay’s part. But could my hearer argue from this that nothing else is done, because I say that this is all the clay can do? If he is an intelligent hearer, he will not dream of doing so, but will say, “I understand. This is what the clay must do; but what must the potter do?” “Ah,” I answer, “now we come to the important part. The potter takes the clay thus abandoned to his working, and begins to mould and fashion it according to his own will. He kneads and works it, he tears it apart and presses it together again, he wets it and then suffers it to dry. Sometimes he works at it for hours together, sometimes he lays it aside for days and does not touch it. And then, when by all these processes he has made it perfectly pliable in his hands, he proceeds to make it up into the vessel he has purposed. He turns it upon the wheel, planes it and smooths it, and dries it in the sun, bakes it in the oven, and finally turns it out of his workshop, a vessel to his honor and fit for his use….The lump of clay, from the moment it comes under the transforming hand of the potter, is, during each day and each hour of the process, just what the potter wants it to be at that hour or on that day, and therefore pleases him. But it is very far from being matured into the vessel he intends in the future to make it….The apple in June is a perfect apple for June. It is the best apple that June can produce. But it is very different from the apple in October, which is a perfected apple….God’s works are perfect in every stage of their growth. Man’s works are never perfect until they are in every respect complete.”

Taken from Hannah Whitall Smith’s, The Christian’s Secret of a Happy Life, Chapter 1

I’ll get back to you View all posts by Scott